The Best States to Become a Millionaire

Millionaire status is revered across the US, signifying immense wealth and success, and an accomplishment of the aspirational American Dream. But, while you might think becoming a millionaire is out of reach, the reality couldn’t be further from the truth.

In fact, an astonishing 22 million Americans fall into this category – and the number is only continuing to rise! So, we decided to investigate which states you’re most likely to find it easiest to become a millionaire.

Comparing an array of factors, including the cost of living, state and local tax rates, and average household income for each state, we’ve been able to reveal the regions that give you the best chance of hitting a seven-figure net worth.

Where Are You Most Likely to Become a Millionaire? 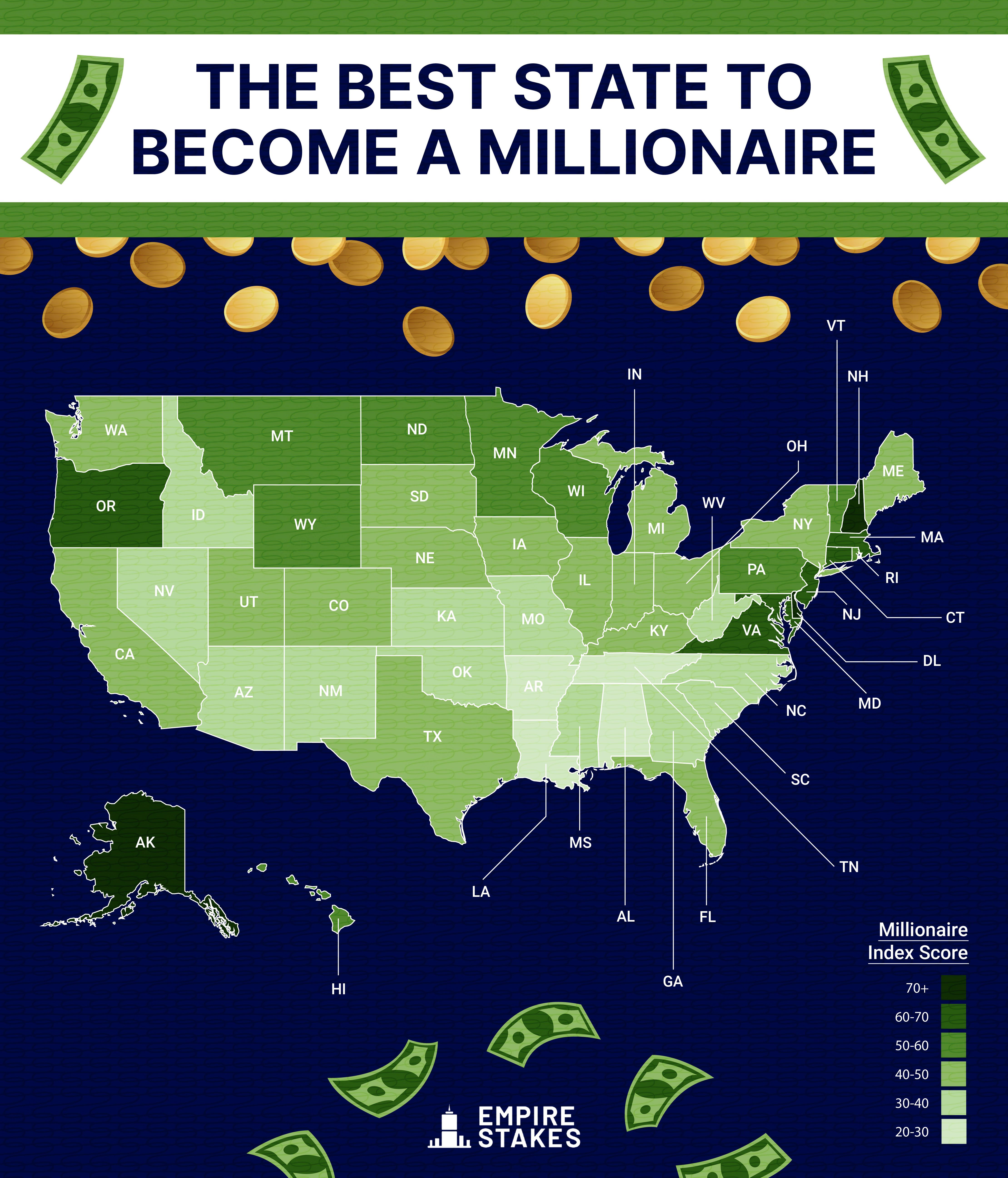 Comparing all US states across a range of factors, we can reveal that the best place to live if you want to become a millionaire is New Hampshire. With an overall index score of 80.733, you’re more likely to hit a seven-digit net worth here than in any other US region. This is largely thanks to the 0.00% state and 0.00% local tax rate on earnings, and average household income coming in just below $100,000 per year.

But New Hampshire’s not the only New England state to make the cut, with Connecticut (69.073) also ranking among the five best places to live to become a millionaire - while Massachusetts narrowly misses out in 7th. People living in Connecticut earn the second-highest average annual income in America - $113,031 – and enjoy 0.00% local tax on income. Interestingly, Connecticut is also home to more millionaire households per capita (0.030) than any other state: 1 in every 33 people.

Ranking as the second most likely place to become a millionaire, we have Delaware (71.675). While the average household income here only ranks 16th countrywide, the 0.00% state and local tax laws ensure residents take home more of what they earn. And with a similar cost of living to the likes of Nevada and Montana, locals are capable of saving and hitting the celebrated millionaire status.

Alaska (71.645) is a bit of an anomaly when looking at the top five places to move to if you want to become a millionaire, as the other four states are all clustered along the Atlantic coast. However, the largest US region earns its place near the top thanks to its high rate of millionaire households per capita (0.028) and 0.00% state tax on earnings – despite having a relatively high cost of living ($129,900).

And finally, for the fifth best place to live if you want to become a millionaire, we head back east, to Maryland (68.071), with the fourth-highest average annual income ($111.417) and second-highest rate of millionaire households per capita.

Which States Just Miss Out?

Where Are You Least Likely to Become a Millionaire?

At the other end of the table, sitting bottom with a measly index score of just 24.819, Arkansas is the US state where you’ll find it hardest to become a millionaire. This is largely down to the state having the country’s third-lowest average household income ($66,557) and among the highest state tax (6.50%) and local tax rates (2.97%) on earnings. Overall, this also contributes to Arkansas having the second-lowest millionaire households per capita (0.016).

Next up, Alabama fairs only slightly less disastrously, with a lowly index score of 26.145. The southern state has the highest rate of local tax on earnings (5.22%), and among the lowest average household incomes ($69,842) – far below the mean household income across all 50 states: $84,854.

Ranking third-worst, Louisiana, a region with an average household income of only $71,001, earns an index score of just 27.083. Combined with a state tax rate of 4.45% and local tax rate of 5.07%, it’s extremely difficult to save and invest here with the aim of becoming a millionaire.

Meanwhile, rounding out the worst five regions to move to if you want to become a millionaire, we have a clean sweep of southern states with Tennessee and Oklahoma joining the party. Tennessee has the second-highest state tax rate in America (7.00%), behind only California, while Oklahoma has the country’s fifth-highest local tax rate (4.44%).

Analyzing the research, it’s interesting to see in which states Americans find it easiest to become a millionaire in, as well as those regions that attract the wealthiest portion of the population. For even more expert insight, check out the latest news in our world.

To determine the states that it’s easiest to become a millionaire in, we considered a number of different factors:

Each indexed factor was then summed to give a score out of five, and then multiplied by 20 to give a final score out of 100. States were then ranked.

When using this data and research, please attribute by linking to this study and citing EmpireStakes.com.