Survey: One in Three Sports Fans Back College They Did Not Attend

March Madness has tipped off, which means it’s time for Americans to turn their eyes toward the teams competing to hoist the NCAA men’s and women’s basketball national championship trophies in early April.

A recent survey by EmpireStakes.com looks at how a person’s alma mater relates to which NCAA teams they support, gathering information on how people became fans, how often they watch their alma mater play basketball, in addition to other elements.

New York sports betting launched Jan. 8, giving the state’s sports fans even more opportunity to be engaged with the teams they love.

Here’s a detailed breakdown of what our survey found:

How Many People Are Fans of Where They Attended College?

The EmpireStakes.com survey found more than one in three respondents cheered for schools they did not attend, speaking to the ability of American sports fans to diverge from their personal collegiate ties when it comes to March Madness and college football.

But the survey also found Americans are 14% more likely to be a college sports fan of a school they did attend, versus one they have no personal tie to, which speaks to the deep ties alums have to where they spent their formative years.

For college basketball fans in New York, there was only one state university in the men’s NCAA Tournament — Colgate. But both New York and New Jersey state laws prevent you from betting on games involving college teams from the state. 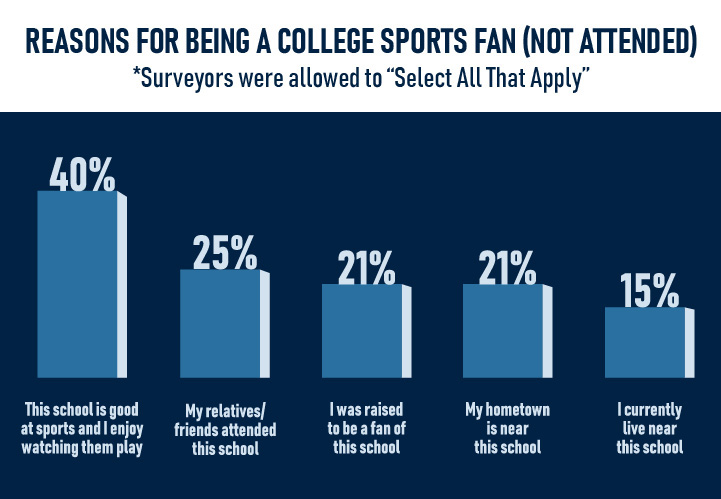 What Reasons Do College Fans Have for Supporting Schools They Didn’t Attend?

Among the reasons given for supporting a non-alma mater by respondents were things like having another school that’s better at the sports they like to watch and are more enjoyable to watch than their personal alma mater.

Other answers included having relatives or friends that attended the other school, being raised a fan of another program, having a hometown near the school, and currently living near the other program.

In total, 40% of respondents said they cheered for other, non-alma mater programs because they were good at sports and were enjoyable to watch live.

The second-leading answer, with 25% of responses, was a person’s relatives or friends attended said university or college, while two separate answers (Raised to be a fan of the other school/my hometown is near this school) gathered 21% percent of responses apiece.

Bringing up the rear was living near the other program, with 15% of responses citing proximity as a root cause for their non-alma mater fandom.

EmpireStakes.com can help you bet this month’s college basketball, with its guide for betting on March Madness. 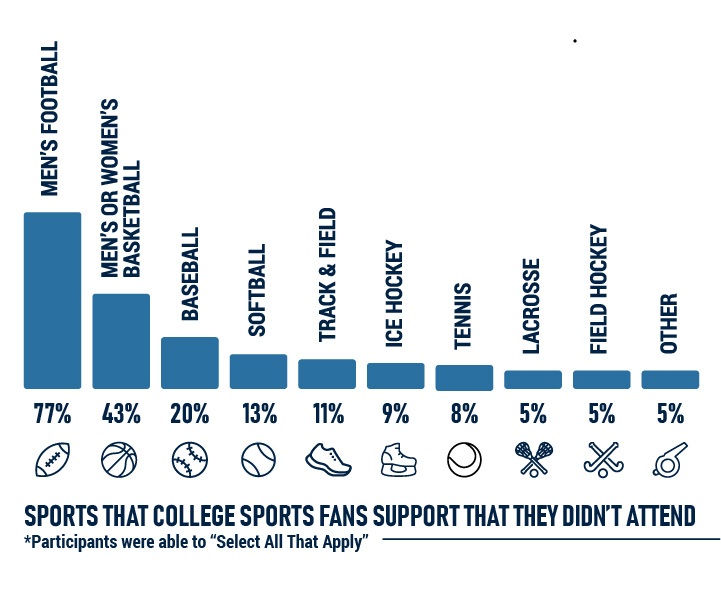 What Sports Do Fans Support of a School They Didn’t Attend?

Of all the sports people said they enjoy, football drew most responses at 77%, followed by men’s and women’s basketball (43%). 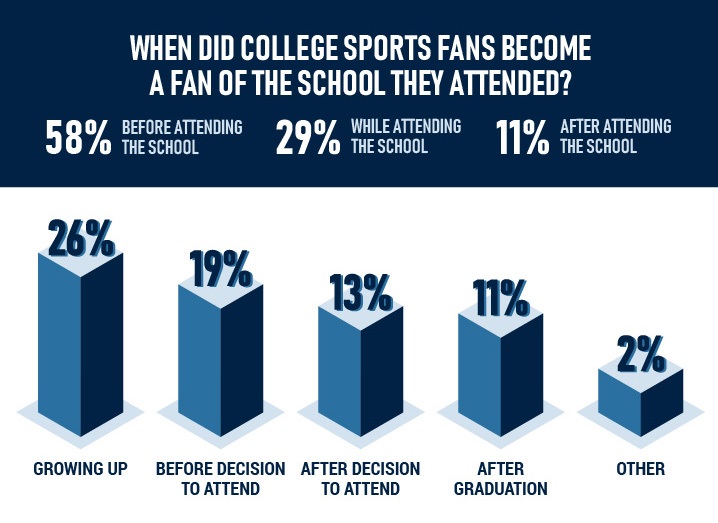 When Did College Sports Fans Become a Fan of the School They Attended?

To break that point down a bit further, the survey found 26% of respondents grew up rooting for their school, while 19% did so before deciding to attend the given school.

Another 13% of respondents said they became fans after making their decision to attend said university or college, while 11% did so after graduating.

EmpireStakes.com commissioned YouGov Plc to conduct this survey. All figures, unless otherwise stated, are from YouGov Plc. The total sample size is 1,053 American adults. Fieldwork was undertaken between Jan. 4-7, 2022. The survey was carried out online, and the figures have been weighted and represent all American adults aged 18 and over.

Feel free to use this data and research with proper attribution linking to this study. When you do, please give credit and link EmpireStakes.com.

Christopher Boan writes for EmpireStakes.com and has been covering sports and sports betting for more than seven years, with experience at ArizonaSports.com, the Tucson Weekly and the Green Valley News.