Millions of fans are willing to travel across the country to see their favorite team, which is among the many reasons that make the NFL a goliath in the world of sport. That aspect surely is not lost on mobile New York sportsbooks and bettors.

But where do New York’s NFL teams rank among the league’s best destinations for opposing fans?

EmpireStakes.com, your source for the top New York sportsbook promo codes, sought to discover just that.

Comparing an array of factors, including the distance between each stadium and the nearest airport, the number of bars and hotels, and the cost of visiting each location, we’ve been able to assign each NFL team an overall index score and rank the Buffalo Bills, New York Jets and New York Giants.

The three NFL teams in New York (well, technically two in New Jersey and one upstate) rank in the lower half of the league, but the Buffalo Bills have the best away gameday experience of the three.Here is a team-by-team look:

Analyzing each NFL team according to the quality of the away fan experience, New York’s teams have struggled, all ranking in the bottom half. However, with an overall index score of 45.7 out of 100, the Buffalo Bills boast the Empire State’s best away supporter experience.

Notably, the Bills’ place above their New York counterparts when it comes to the number of bars within a mile of the stadium, three vs two, as well as the complete cost of the gameday experience ($488.96). 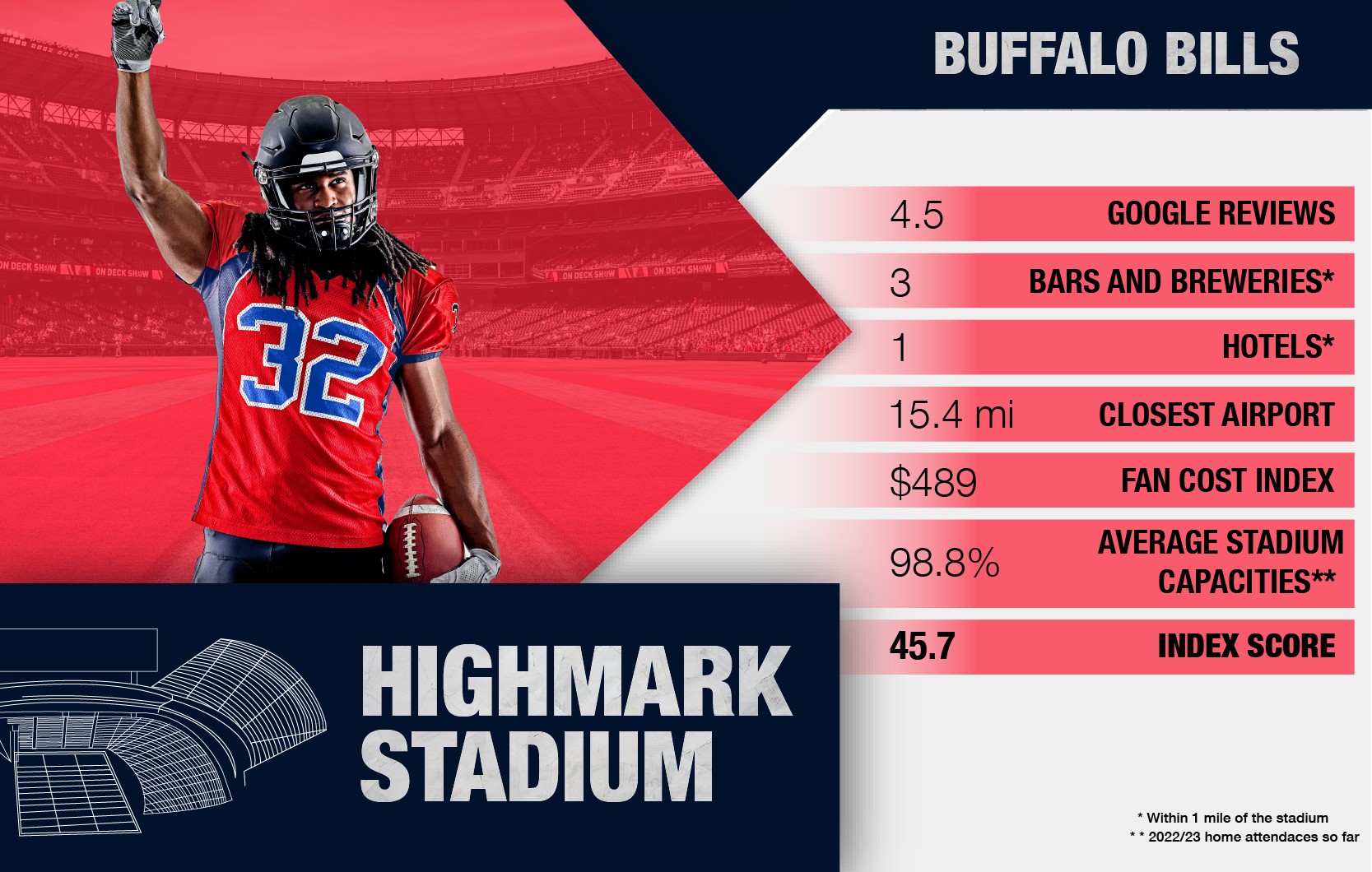 The New York Jets offer the second-best NFL away fan experience in the Empire State, with an index score of 36, helped along by the relatively affordable cost of visiting MetLife Stadium.

Finally, the New York Giants provide the state’s worst NFL away fan experience (26.3), and the second worst when all teams are considered, ahead of only the Washington Commanders (18.6).

Playing at the same field as the Jets, MetLife Stadium, the Giants mirror their neighbors for number of nearby bars (2) and hotels (5), as well as distance from the airport (4.1 miles), but insist on charging supporters over $100 more per game.

In fact, the $609.82 it costs to take the family to a Giants game is one of the most expensive days out across the entire NFL, with only seven other teams charging more.

New York betting apps would have Buffalo as the best of the trio as well.

Up to $1,250 on Caesars + WATCH & BET on Select NFL Games on the app - Promo Code: EMPIREFULL
EMPIREFULL
Must be 21+ to participate. T&Cs apply.

Where Are the Best and Worst NFL Away Games?

We’ve analyzed where New York’s NFL franchises rank among the best and worst away games for visiting supporters, but which other teams sit at either end of the table?

The Best Away Games for Visiting NFL Fans

The Worst Away Games for Visiting NFL Fans

To determine where New York’s NFL teams rank when considering the best away supporter experience, we considered six different factors:

Each team was ranked for each factor and assigned a weighted index score. Index scores were then combined to give a total out of 100 and teams were ranked.

EmpireStakes.com offers analysis like this that is beyond the norm and is a great help for navigating NFL betting in New York.

When using this data and research, please attribute by linking to this study and citing https://www.empirestakes.com/.

Bet $5 on the Big Game, Get $200 in Bonus Bets Instantly
Activate Code
Must be 21+ to participate. T&Cs apply.