Will It Snow On Christmas In New York: Latest NYC Odds

After a typically tough year for New Yorkers the holiday season is finally here. 2021 has been full of political drama, the city's economy has taken a huge hit from the pandemic and socializing with friends and family has been badly interrupted. So now it's time to take a lighter look at New York life. Will we get a white Christmas? Will we see the beauty of our city blanketed in white? What are the odds?

NOTE: Betting on the weather is not authorized in New York. These odds are for entertainment purposes only.

The last time we had a white Christmas in New York City was in 2009. Twelve more years of climate change have passed since then. Nevertheless, the chance of snow during the Christmas season has not gone away. 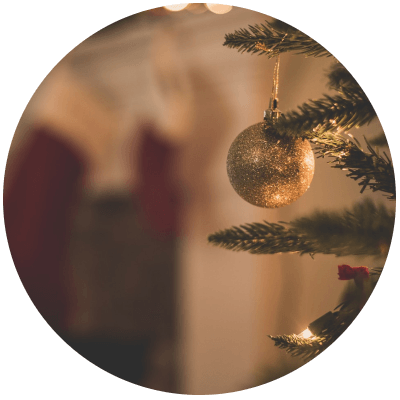 Christmas Eve's forecast in New York rates no higher on the list of probabilities than Christmas Day. Cloudy and a little bit colder with temperatures in the high 40s but no precipitation. At least if you've delayed your Christmas shopping, you should stay dry as you race from shop to shop! 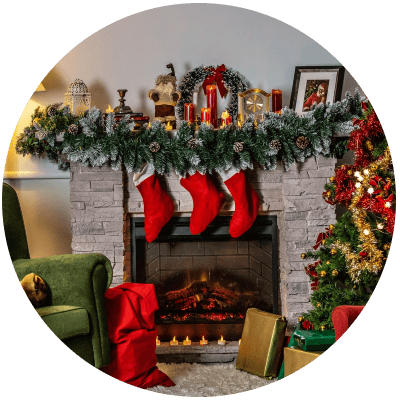 The National Oceanic and Atmospheric Association are forecasting only a 11% chance of snow for New York City on Christmas Day. They give a slightly better chance for Central Park at 11%. The National Weather Service is even less optimistic; it has its forecast set for a cloudy day with mid 50s. For optimism, we need to go to the Old Farmer’s Almanac which simply expects "snowy periods." 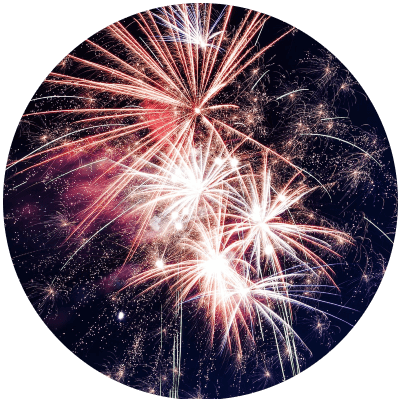 Chances of snow for New Year's Eve are about half of the chances for Christmas Day. The last few days of the year should see temperatures rising to levels unusually warm for the season. When that ball drops in Times Square it should be a dry night with temperatures well above freezing at around 40 degrees Fahrenheit-that's 4 degrees Celsius so hat and gloves weather, but no snowshoes required!

What Is Defined as a White Christmas?

The National Weather Service defines a white Christmas as one where an inch or more of snow falls. For betting, bookmakers pin this down precisely. Whether you win a bet or not is based on the reported snowfall at a specific weather recording station. Sadly there are no legal bookmakers setting the odds where New Yorkers can place a bet. But among friends a little wager is OK. Odds of +700 are neutral between friends.

Has It Historically Snowed During Christmas In New York City?

It might not be common but New York City has seen its fair share of White Christmases. There have been 18 times since 1912 when at least an inch of snow has fallen in Central Park.

Times With at Least an Inch of Average Snowfall

Run your statistical eyes over that list and it looks like chaos theory in action. The 1970s saw not a single New York white Christmas. There were none during the second world war and none in the 2010s. President Obama saw one in 2009, President Trump saw none during his time. The 1960s was the best decade within living memory with four snow-covered Christmases to celebrate.

Looking back to 1981 the average snowfall during December in NYC has been 4.8 inches. The average December sees snow over 0.1 inch fall on only 2.3 days in the month.

As always bare statistics say everything and nothing. Break out the individual years to see the variation and you will see that about one year in four New York City gets over 7 inches of snow. And another one year in four is virtually snow-free with less than half an inch for the whole month.

If you are visiting NYC for the holidays this year it looks like being one of the low snow years. Cross the Brooklyn Bridge, book into one of the New York City hotels in Manhattan and you should be able to stroll to Central Park or One Times Square Building to see the ball drop and your feet will remain dry.

New York has legalized sports betting in the state and soon the first NY online betting sites will launch. NY sports fans who like to put their money on the big games will soon be able to do so. But don't think it will be legal to bet on New York snowfall!

The new gambling laws and regulations restrict bets to sporting contests. Betting on a Bing Crosby style White Christmas or New Year's Eve will have to remain just between friends. But be on the lookout for sportsbooks launching soon like BetMGM, DraftKings and FanDuel, among others. The operators will be offering the best NY sportsbook promos to new accounts once they do go live.

Famous Places To Visit In NYC In The Snow

Of course if it does snow there are few cities that are as impressive as New York when its daily grime has been covered in white and the splendor of its architecture stands out. Some places not to miss on any visit include: 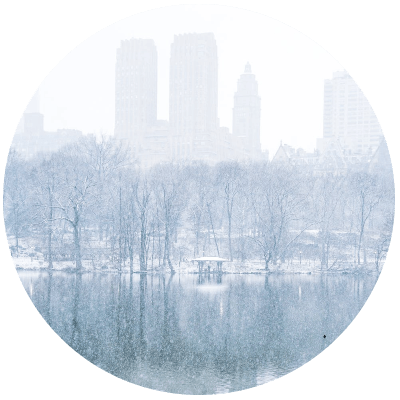 Central Park In the Snow

The wonderful Christmas film Home Alone 2 saw Macaulay Culkin enjoy the snow in Central Park. The snow was fake as the film was made nine years after the last time New York had snow on Christmas Day. Nevertheless, the images captured the spirit of Christmas perfectly. Central Park is arguably the most filmed location in the world and it attracts over 40 million visitors a year.

The park covers 843 acres of some of the most expensive real estate in the world. Attractions include the Ramble and Lake, the Jacqueline Kennedy Onassis Reservoir, and the Hallett Nature Sanctuary. The Central Park Zoo is well worth a visit but if 2021 does see snow quite a few of the animals will be less likely to be out and about. Seasonal fun is better served by the Wollman Rink which featured in Love Story. 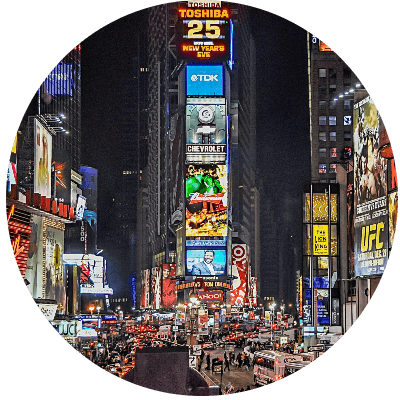 Times Square In the Snow

New Year's Eve in Times Square is a bucket list ticket item for many. The famous ball drop that signals the New Year begins at 11:59pm. The ball gracefully slides down a flagpole at the top of number One Times Square finally stopping at exactly midnight.

Curiously Times Square is not actually a square. It's loosely a pair of triangles so more like a bow-tie shape. As many as half a million people flock to the square to see in the New Year so get in place early if you want to get a good view-or tuck in at home and watch a live stream! 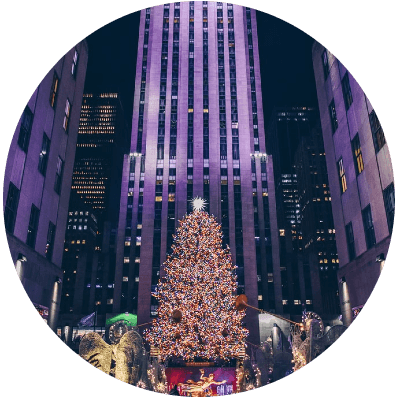 Rockefeller Center In the Snow

The giant Christmas Tree and phenomenal Christmas lights usually come on at the beginning of December at the 22 acre Rockefeller Center. On Christmas Day the tree is lit for the full 24 hours otherwise it's lights out at midnight.

The Center is the location where Culkin finally reunited with his mother in Home Alone 2. She figured that her boy would head for the biggest most beautiful Christmas tree in New York and she was right. It's a sight not to be missed and on a snowy day it transforms a commercial center into a fairyland. 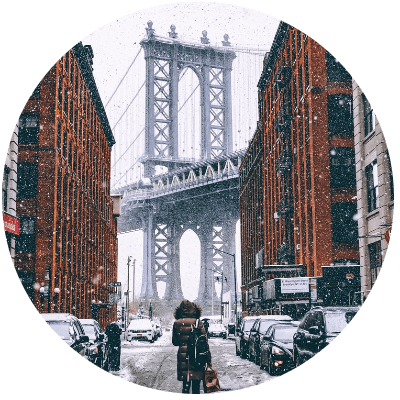 Brooklyn Bridge In the Snow

At nearly 1,600 feet in length the Brooklyn Bridge is an impressive piece of engineering. It connects Brooklyn with Manhattan and was the largest ever suspension bridge when it opened in 1883.

You can walk across the Brooklyn Bridge and marvel at the view you get of Manhattan with its famous landmark buildings on one side and Brooklyn with historic buildings on the other.

The bridge is one of New York's most famous symbols and covered in snow it is also one of its most beautiful places. Ignore the cold and walk across the bridge and Christmas in New York becomes a magical experience. 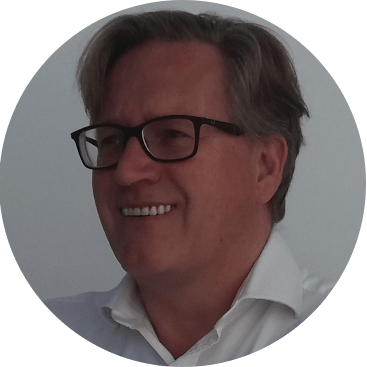 Joss Wood is a Senior Writer for EmpireStakes.com. Joss is globally considered one of the leading voices in the gambling industry, especially North American sports betting.