New York is home to countless sporting legends, but have you ever wondered which heroes are the most loved in the Empire State? Baseball dominates in New York, with Yankees icons Alex Rodriguez, Derek Jeter and Mariano Rivera all featuring in the state’s top five sporting heroes. Basketball star and Brooklyn Nets favorite Deron Williams and legendary Swedish-born hockey star Henrik Lundqvist complete the quintet. 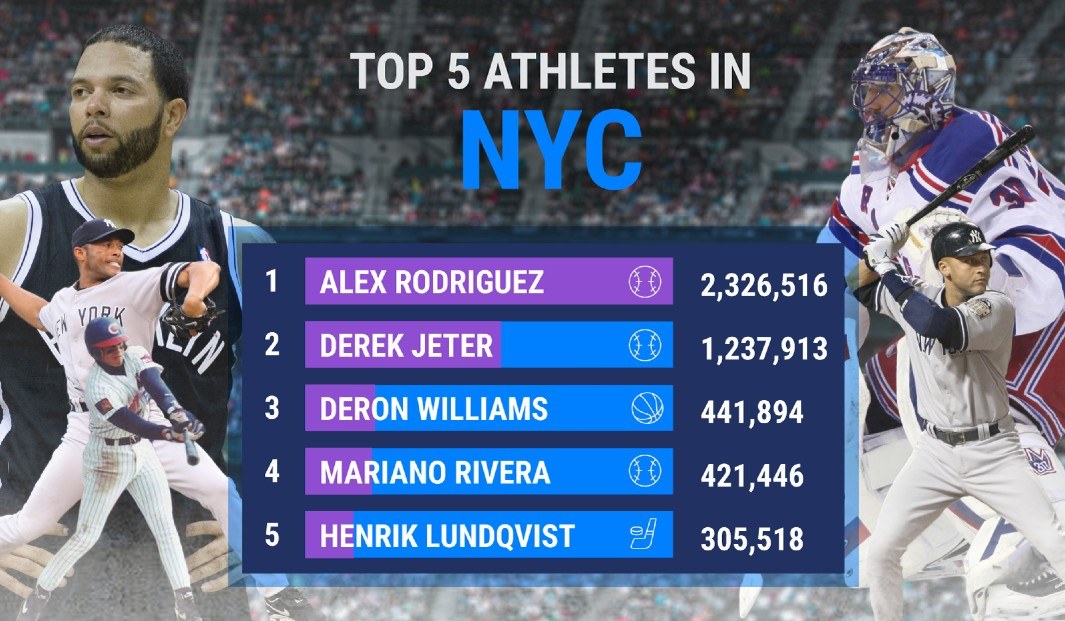 Learn a Little More About Each Hometown Hero

Manhattan-born Alex “A-Rod” Rodriguez enjoyed an illustrious career and spent 12 of his 22 MLB season playing with the New York Yankees. A-Rod is sixth on the club’s all-time home run chart with 351, including 54 HRs in 2007, making him one of only four players to hit that many in a season for the Bronx Bombers. A-Rod is in fine company as one of the Yankees’ greatest ever players.

He was born in New Jersey and spent much of his childhood in Michigan, but Derek Jeter became one of New York’s favorite sons after a glorious 20-year career with the Yankees, including 12 seasons as captain. He was an integral part of the team’s dominating success in the late ‘90s and early 2000s and saw his No. 2 jersey retired in 2017. Jeter was voted into the Baseball Hall of Fame’s Class of 2020.

Two-time Olympic gold medalist Deron Williams spent five seasons as point guard for the Nets and was part of the 2012-13 team that uprooted from New Jersey to Brooklyn, a move popular in the Empire State. He was born in West Virginia, but Williams’ time in the Big Apple has ensured he’ll always be remembered fondly by New Yorkers.

Born in Panama, Mariano Rivera began his MLB journey in 1995 and immediately captured the hearts of millions. An honorary New Yorker, five-time World Series champion Rivera spent 19 seasons with the Yankees before retiring in 2013. Regarded as the best relief pitcher ever and the first ever unanimous Hall of Fame inductee, Rivera is adored by New Yorkers as though one of their own.

After 15 seasons as goaltender for the NHL’s New York Rangers, native Swede Henrik Lundqvist, affectionately crowned “King Henrik” for his dominating style, is comfortably one of the state’s most revered athletes. He holds numerous Rangers franchise records including wins (459), save percentage (.918) and shutouts (64). Lundqvist’s long spell in New York ensures he’ll go down in state folklore.

To rank New York’s top five hometown heroes, we first collected data around the state’s most successful and prodigious athletes from Bleacher Report. From here, we analyzed each athlete’s Wikipedia page to assess visits during a year-long period between March 2020-March 2021. The athlete with the most page views during this period is considered his state’s leading hometown hero, with the next four making up the rest of the top five.