Successfully securing sports tickets can sometimes feel unimaginable, particularly in states as populous as New York. There are countless fans fighting for the chance to experience the likes of the Yankees, Knicks, and Giants live and in person. It is highly likely that teams have season ticket waiting lists going back years. But what is the genuine cost for sports enthusiasts when they’re finally given the opportunity to buy a season ticket for their favorite team?

We’ve compared the average salaries, tax, and cost of living in New York City, Buffalo, Rochester, Syracuse, and Albany, to reveal how many working hours it typically takes fans to afford tickets at New York’s top teams. We know interest is high because NY mobile sports betting apps have drawn more than $12.8 billion in handle since launching in January. 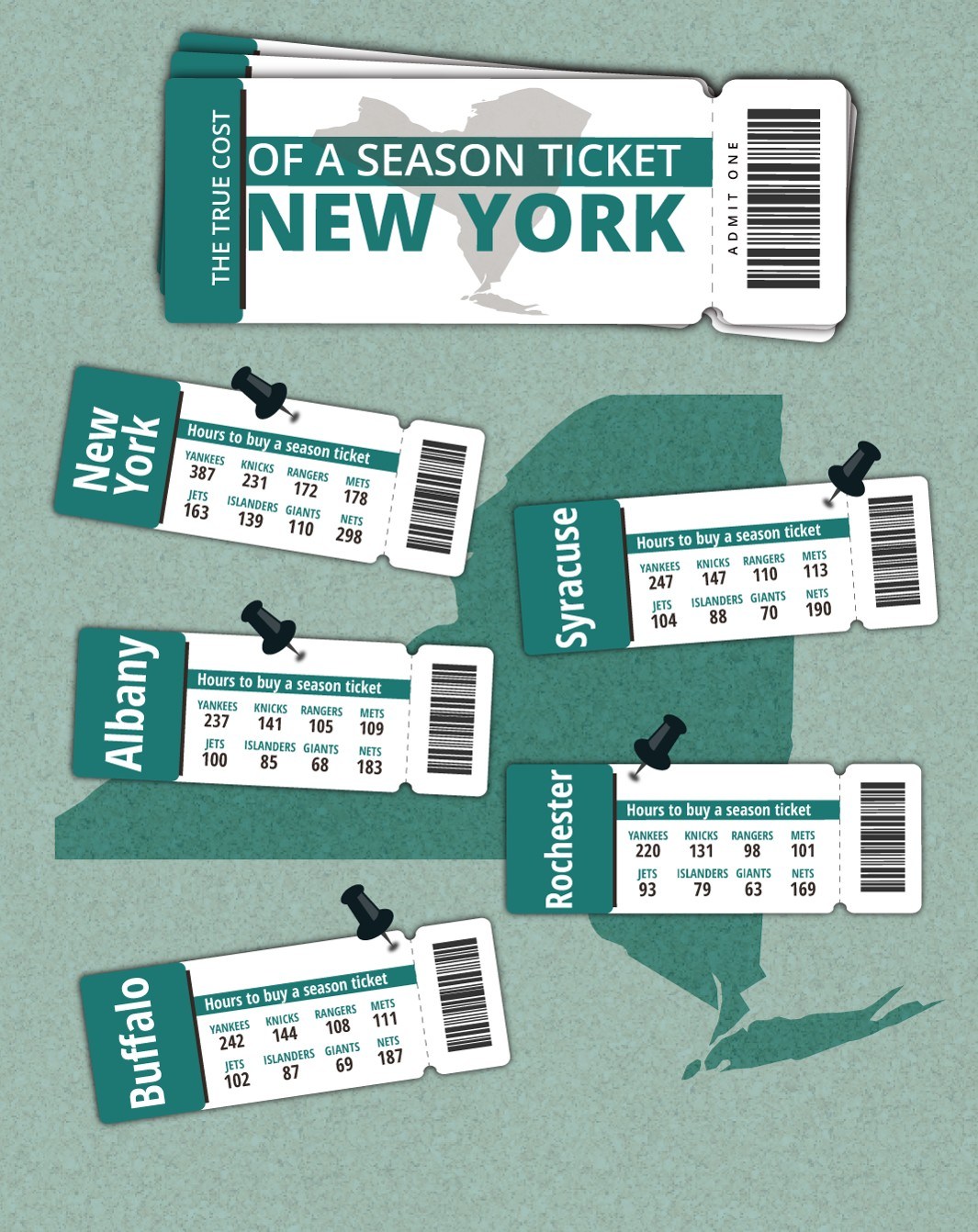 New York City’s sports fanatics find themselves working longer hours in comparison to any other set of supporters across the state, with New York’s highest rate of tax and cost of living. As a result, the typical Yankees fan is required to work 387 hours to afford a season ticket – or over 11 weeks working 9-to-5.

Islanders fans need to work a little less (87), while Giants supporters are required to work 69 hours – the equivalent of just under two weeks working 9-to-5. Of course, many folks in Buffalo would be inclined to stay around and support the NFL Bills and NHL Sabres right in their own city. The best NY Betting promos are available everywhere in the state here at EmpireStakes.com throughout the year.

In Rochester, sports fans have the highest average rate of disposable income in New York, meaning Yankees fans in this location only need to work an average of 220 hours to be able to afford a season ticket – that is just over half the time required of fans in NYC.

Meanwhile, Nets supporters usually work 169 hours, followed by fans of the Knicks (131), Mets (101), Rangers (98), Jets (93), and Islanders (79). Lastly, Giants fans need to work an average of 63 hours to be able to afford a season ticket. Fans in Rochester are much closer to the Bills and Sabres, about 80 or so miles west in Buffalo.

Sports devotees in Syracuse are typically required to work the second-longest of any city in New York to have enough money for their preferred season ticket.

In Albany, a Yankees season pass is the equivalent of 237 working hours, followed by the 183 hours it will take to earn enough for a Nets season ticket. Supporting the Knicks, Mets, Rangers, and Jets will also cost the equivalent of 100+ hours, while it typically takes 85 hours to earn enough for an Islanders ticket and 68 hours for a Giants season pass.

With average salaries and rate of disposable income varying dramatically across New York, it’s fascinating to see how much the true cost of a season ticket depends on where you live. For even more expert insight like this, as well as the latest odds at New York sportsbooks and picks for your favorite teams, keep it right here at EmpireStakes.com whatever the season.