Despite Heavy Media Attention, Knicks and Nets Not Among Most Rewarded NBA Fanbases

Early in the 2022-23 NBA regular season, the Brooklyn Nets (1-5) and the New York Knicks (3-3) have gotten off to ... less than stellar starts across NY sportsbooks, but are their fanbases still keeping the faith with a team that has disappointed and another that is seemingly always rebuilding?

EmpireStakes.com developed a ranking system of all 30 NBA teams to find what fanbase has been rewarded the most over the last 11 seasons.

Unfortunately for hoops fans in The Big Apple, both New York franchises are outside the Top 20.

Stay close to this site for the best New York betting apps during the NBA season.

The first category “Minutes Spent Per Win” was determined by taking the amount of regular season games played by each team (from the 2011-12 season to 2021-22 season) multiplied by the average length of an NBA televised game (2 hours, 13 minutes).

The second category “Points Deducted for Playoff Success” was utilized to decipher the value of seeing playoff success during those 10 seasons gathered in the first category. The point values were 1 point per playoff berth, 3 points per playoff series win, 3 points per NBA Finals appearance, 15 extra points for NBA Championship win.

After adding all the points together for every postseason from 2011-12 season to 2021-22 season, the points were deducted from Category 1 to arrive on the final points & rankings.

The Nets have garnered just 13 points with 282 points total, while the Knicks have netted just six points for a total of 321.

EmpireStakes is your home for the best NY NBA betting sites as the Knicks and Nets march on this season. 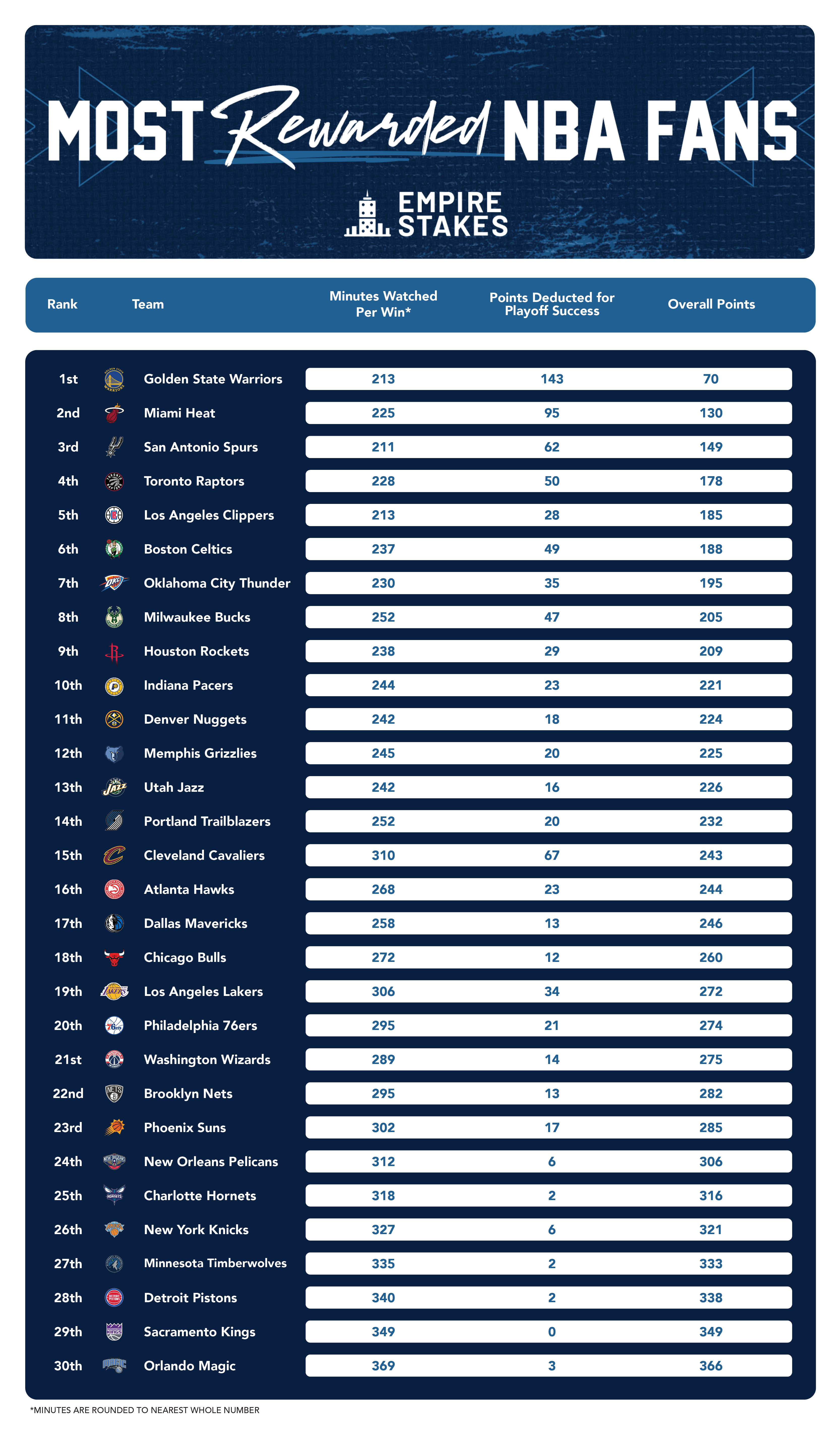 Why the Low Rankings?

Tune into ESPN or fire up national sports talk radio on a given day, and both the Nets and Knicks are likely to garner some coverage. In the hotbed that is the New York hoops scene — complete with plenty of NY sportsbook promos — fans pay attention to their local teams with a sharp eye.

Unfortunately over the past decade-plus, neither the Knicks or Nets have provided any semblance of consistent success on the court for their respective fanbases.

The Nets have won just two playoff series in the past 11 seasons, with one of those coming almost a decade ago under then-coach Jason Kidd. The franchise sent waves across the NBA with their additions of Kevin Durant and Kyrie Irving in recent seasons, but Durant's injuries and Irving's ... eccentric behavior have failed to instill a winning culture in Brooklyn.

The team's slow start this season, coupled with Irving's continuous disruptive behavior, is setting the table for another early playoff exit.

The Knicks meanwhile have won just one playoff series in the past 11 seasons, and have only qualified for the playoffs once since 2013.

New York rallied behind the 2020-2021 team under Tom Thibodeau, but the team regressed in his second season, going 37-45 to miss out on the postseason. Thibodeau is also the eighth coach Knicks fans have cheered for over the last 11 seasons, including interim options that subbed in for Mike D'Antoni, Derek Fisher and David Fizdale.

The Nets (2-5) with their now healthy core three in place with Irving, Durant and Ben Simmons are somehow still among the top favorites in all of their titles they are seeking.

Brooklyn is the second favorite to win the Atlantic Division (+400) by Caesars Sportsbook NY, behind the defending champion Boston Celtics at -145.

To capture the Eastern Conference, the Nets (+410) are the third choice, behind co-favorites Boston and the Milwaukee Bucks, both at +250.

The Knicks (3-3) continue to build around newly-acquired Jalen Brunson, RJ Barrett and Julius Randle. Their odds reflect that process.

New York is the last choice to win the Atlantic Division at +5500. The Toronto Raptors are Caesars’ next choice at +750.

Ironically, the Knicks odds are the same to win the Eastern Conference at +5500.

To win the NBA Championship, the Knicks are listed at +12500.

The good thing is the season is young and their fanbase is one of the most diehard in the league. They will be there to support, but will they finally get rewarded with a playoff appearance?

Check back here for the latest news across the New York basketball scene as well as New York NFL betting.

Lou Monaco had been East Coast Scene columnist for Gaming Today in Las Vegas since June 2019, covering the East Coast sportsbook scene with emphasis on NJ and PA. He also currently is a part-time writer for the high school sports department for NJ Advanced Media (NJ.com) in Iselin, NJ. Lou has over 30 years sports experience with previous stints at ESPN SportsTicker, Daily Racing Form and Oddschecker.