What Is The True Cost of a Beer in New York?

The drinks market is growing year after year, with different variations of our favorite beers being brewed for us to enjoy.

With this in mind, and since IPAs have taken the world by storm, we wanted to take a break from NY betting to see how much it’s really costing you to buy some tasty hops across different locations in New York state.

After collecting and analyzing data from Numbeo, we can reveal the New York areas where you're most likely to pay over the odds for a beer (both domestic and imported). We’ve discovered the true cost of a beer, looking into prices from supermarket-bought brews to those you order at a restaurant.

So if you love the hops as much as we do, read on to find out how much you’ll be paying for a beer in the Big Apple and beyond! 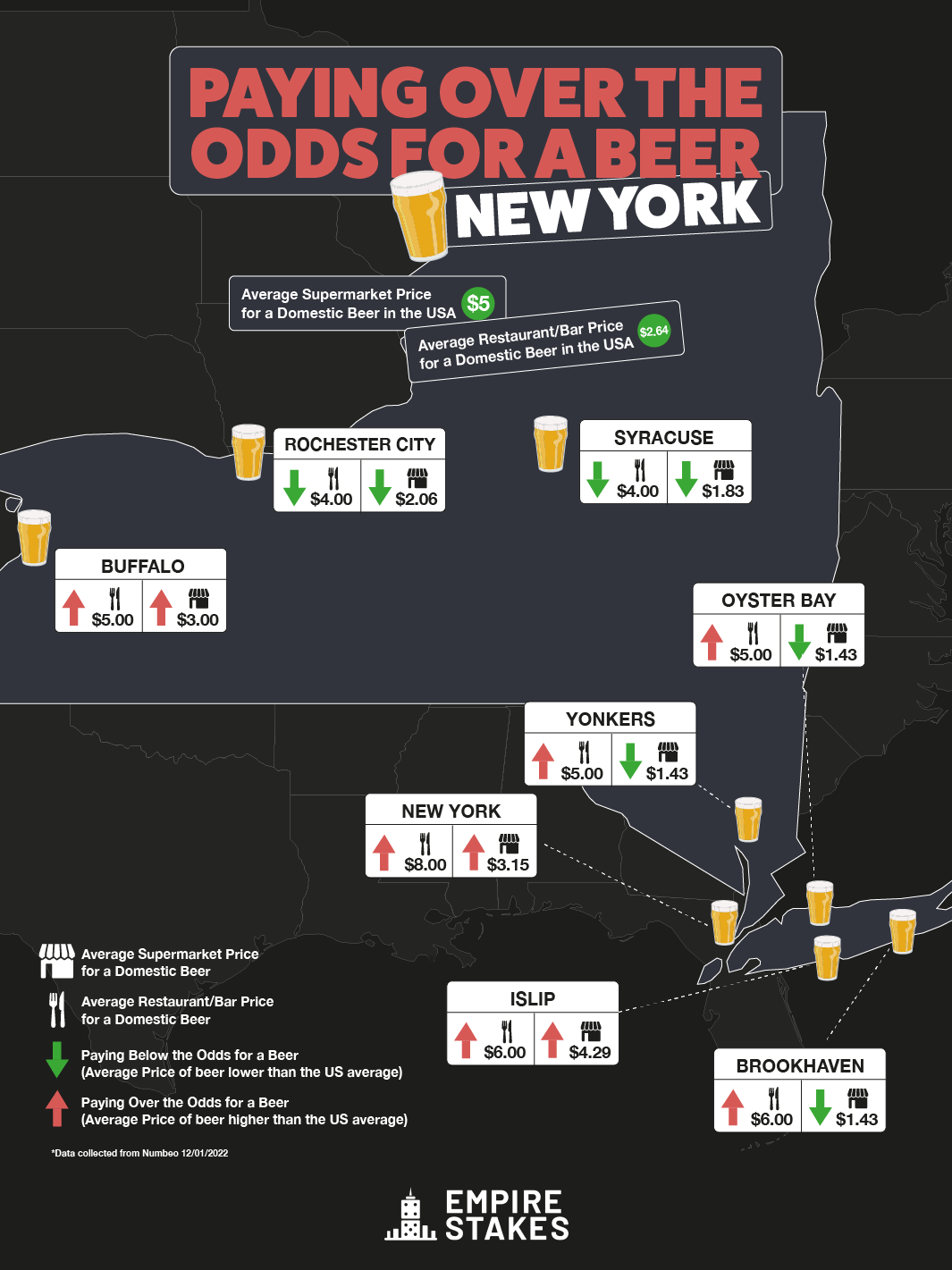 The Cost of Supermarket-Bought Beers

We looked at data for both domestic and imported beer costs from Numbeo to discover where’s the cheapest – and most expensive - for when you’re heading to the store for some hops.

The chances are pretty high for paying more for the average supermarket beer in New York, with many of the local areas charging more than a couple of bucks for a store-bought brew.

But what NY areas will see you spending the most on beer at a supermarket?

Odds are you will be spending more on an imported beer in a New Rochelle supermarket than any other area in New York, costing a whopping $6 for the pleasure. Not to mention, it only costs 29 cents less for a domestic beer here ($5.71).

So, when unloading your groceries (and beer-tastic treats) at the checkout, know that state as a whole is looking at fairly costly prices, even when you’re just heading over to the store.

In New York City, beer lovers can expect to pay $3.15 for a domestic, and $3.95 for an imported supermarket-bought beer.

After this news, we wouldn’t be surprised if sipping an ice-cold beer with your next dinner isn’t high on your agenda anymore when heading to these areas!

The Cheapest NY Spots to Buy a Beer at a Restaurant

If you’re big on beer but don’t want to pay over the odds for one in a restaurant, your best bet is Schenectady, with imported beers here costing diners just $3.50, and domestic beers being 17 cents more ($3.67). And it only will set you back $4 to buy a domestic beer in Utica, New Rochelle, Syracuse and Rochester restaurants.

Whereas imported beers are around either one or two dollars more in each of these locations: (Utica, $6), (New Rochelle, $6), (Syracuse, $5) and (Rochester $6.). It seems Schenectady is a winning location – after all, it’s the only place where restaurants will charge you less for an imported beer over a domestic beer.

Bet $5 on the Big Game, Get $200 in Bonus Bets Instantly
Activate Code
Must be 21+ to participate. T&Cs apply.

Utica takes the lead for the cheapest place in New York to buy a domestic beer, despite being the 10th most populous city in the whole of New York. You will be paying an average of $1.21 at a Utica supermarket, the home of AHL ice hockey team - Utica Comets. However, an imported beer would cost more than double that price ($3.33).

Beer lovers will also end up paying $4 for a domestic beer in a Utica restaurant, and even higher for an imported beer ($6). So, it really depends what type of beer you buy and where you’re buying it from when you’re traveling around New York.

This proves that there are plenty of places to grab a well-priced imported beer among New York’s supermarkets, you just need to head to one of the above areas (and stock up!)

2nd Chance Free Bet on the Big Game Up To $100 - Promo Code: EMPIRERIV
EMPIRERIV
Must be 21+ to participate. T&Cs apply.

Data was analyzed and collected from Numbeo, on the average cost of a beer across the U.S.

Cities across New York were then analyzed to reveal whether places are paying over the odds for a beer. Data was collected on imported and domestic beer. The Average beer in the U.S. was:

Keep tabs on EmpireStakes for more research items like this, as well as NY sportsbook promos.