Findings of the Prehistoric: Where to Find Dinosaur Fossils in the U.S.

Paleontology, including the discovery of dinosaurs, has generated fascination and intrigue since the first dinosaur fossil was recognized in the 19th century, including the multi-billion dollar "Jurassic Park" film franchise that’s spanned three decades.

But, whereabouts are you most likely to make a prehistoric discovery?

To determine where in America you’re most likely to find a fossil or dinosaur bones, we’ve compared the total number of discoveries made per state to the size of the region. We’ve also considered the population of each state to reveal your odds of making a discovery!

With the popularity of paleontology (look no further than the $997.8 million the latest "Jurassic Park" grossed), maybe there will even come a time when NY sportsbooks will offer odds on discoveries.

Up to $1,250 on Caesars + WATCH & BET on Select NFL Games on the app - Promo Code: EMPIREFULL
EMPIREFULL
Must be 21+ to participate. T&Cs apply.

Findings in the Empire State

New York boasted almost 26,000 prehistoric findings as of September 2022, the 4th highest across the U.S.

Out of the 10,500+ dinosaur findings across America, there are only two recorded in New York state (as per PaleobioDB). Both of which were listed in the Norian period, which lasted from ~227 to 208.5 million years ago.

One of these was a Grallator, a three-toed dinosaur similar to the Velociraptor.

Where Are You Most Likely To Find A Prehistoric Fossil?

Comparing the fossil count of each of the fifty states across America, we’ve been able to determine where you’re likeliest to find one (based on findings per square mile) – and what your odds are of making the next prehistoric discovery. 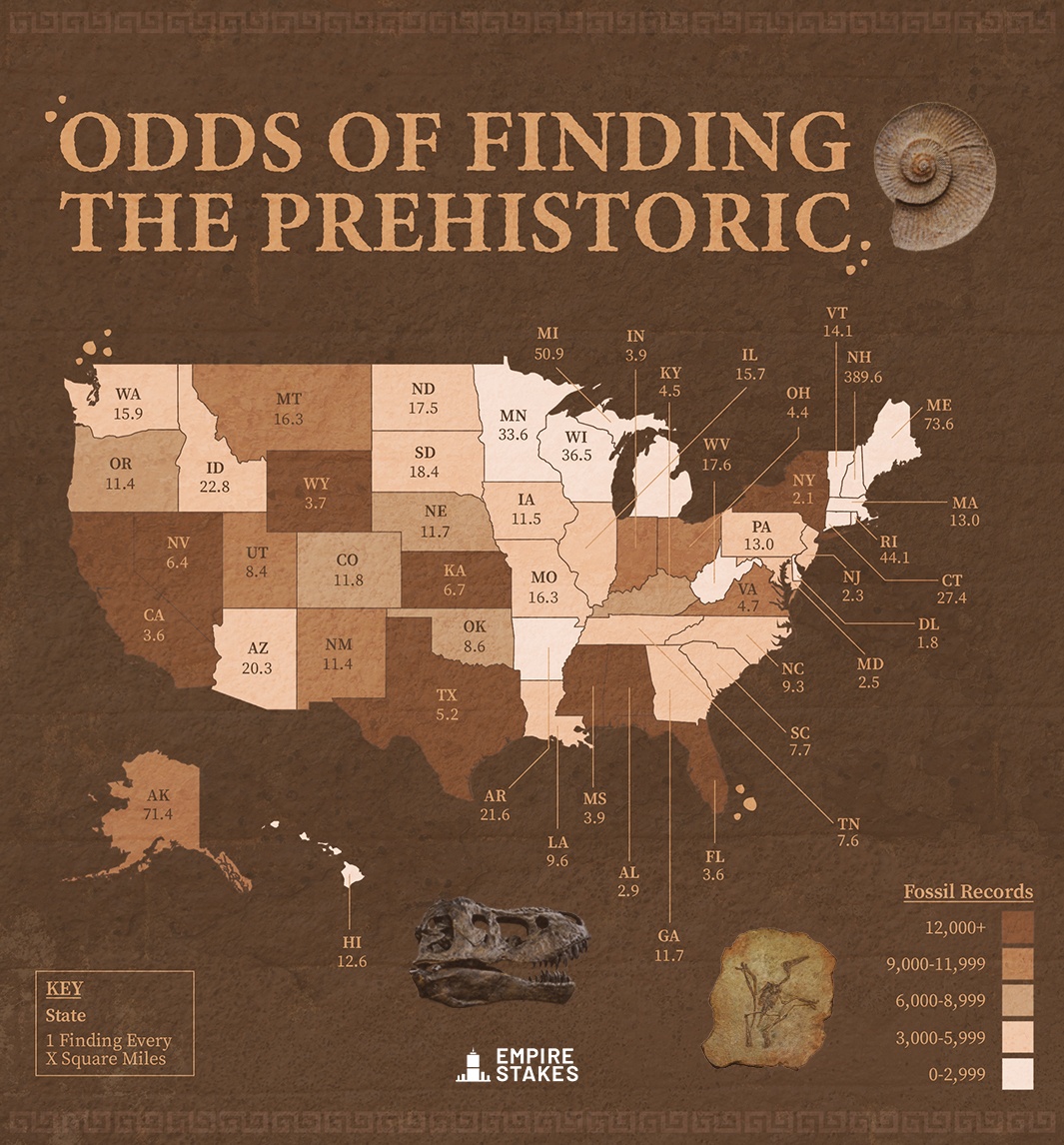 Analyzing our findings, we can reveal that the state you’re most likely to find a prehistoric fossil in is Delaware. With 1,351 fossils found across the small state, that’s a bone every 1.84 square miles. And with a population of just over a million, that’s odds of 1 in every 742 people finding a fossil (+74,270).

Next up, your second likeliest to find a fossil is the state of New York, with nearly 26,000 found across the region’s 54,555 square miles. On average, that’s a prehistoric bone every 2.10 square miles! And with a hefty population of nearly 20 million, that’s 1 in every 764 people making a discovery (+76,415). Despite coming in second, it's still safe to say the Big Apple would be a longshot at Caesars Sportsbook NY with those odds.

Meanwhile, placing fourth among the likeliest places to find a fossil, we have Maryland.

2nd Chance Free Bet on the Big Game Up To $100 - Promo Code: EMPIRERIV
EMPIRERIV
Must be 21+ to participate. T&Cs apply.

Where Are You Most Likely To Find Dinosaur Fossils?

Looking at the number of dinosaur fossils that have been unearthed across America, we can reveal the states you’re likeliest to find new dino fossils (based on findings per square mile), and where you have the best chance of being the one to dig them up.

According to our research, you’re likeliest to discover dinosaur fossils in Massachusetts, with 319 fossils found so far. With a total area of 10,554 square miles, that’s one per 33 square miles. And with a population of over 6.9 million, the odds of being the one to make the next discovery are 1 in 21,895.

Next up, there are 109 dinosaur fossil discoveries attributed to Connecticut’s 5,543 square miles, equivalent to one new fossil for every 51 square miles. And with 3 million people calling Connecticut home, there’s a 1 in 33,078 chance you’ll find one here.

Another east coast state: New Jersey ranks third among the regions where you’re likeliest to discover a dinosaur fossil. With 139 discoveries to date, that’s one for every 63 square miles, and (with a population of just over 9.2 million) odds of 1 in 66,670 that you’ll find the next fossil.

In contrast, nearby New York has odds of almost 1 in a billion, with just two findings and a population of 19.8 million. That likely won't get any action with operators like BetMGM NY.

In fourth, Florida is home to 894 dinosaur discoveries, which, across the state’s 65,758 square miles, is a fossil for every 74 square miles you travel through the Sunshine State. Considering the state’s population of over 21.7 million, you’ve a 1 in 24,363 chance of being the one to find the next fossil.

California has seen more dinosaur fossil discoveries than any other state (1,992), despite being almost-totally submerged during the prehistoric period, with the likes of T-Rexes believed to have roamed the coastal region. At 163,695 square miles, that’s a fossil found every 82 square miles, and with a population of 39.2 million, you have a 1 in 19,697 chance of making a discovery.

The U.S. is such a diverse nation, from the vibrant ocean coastline of California to the arid Nevada desert. But with the odds of finding a prehistoric fossil or dinosaur fossil strongest in Wyoming, the mountainous west is actually your best bet for a prehistoric discovery.

For even more interesting insight from our betting experts, head on over to EmpireStakes.com.

When using this data and research, please attribute by linking to this study and citing EmpireStakes.com.

And remember, this site is also home to the best NY sportsbook promos.

To collect the data, we analyzed all fossil records across the U.S. using PaleobioDB (https://paleobiodb.org/). We then compared these figures to population and area data in each state to determine the odds of finding the
prehistoric.