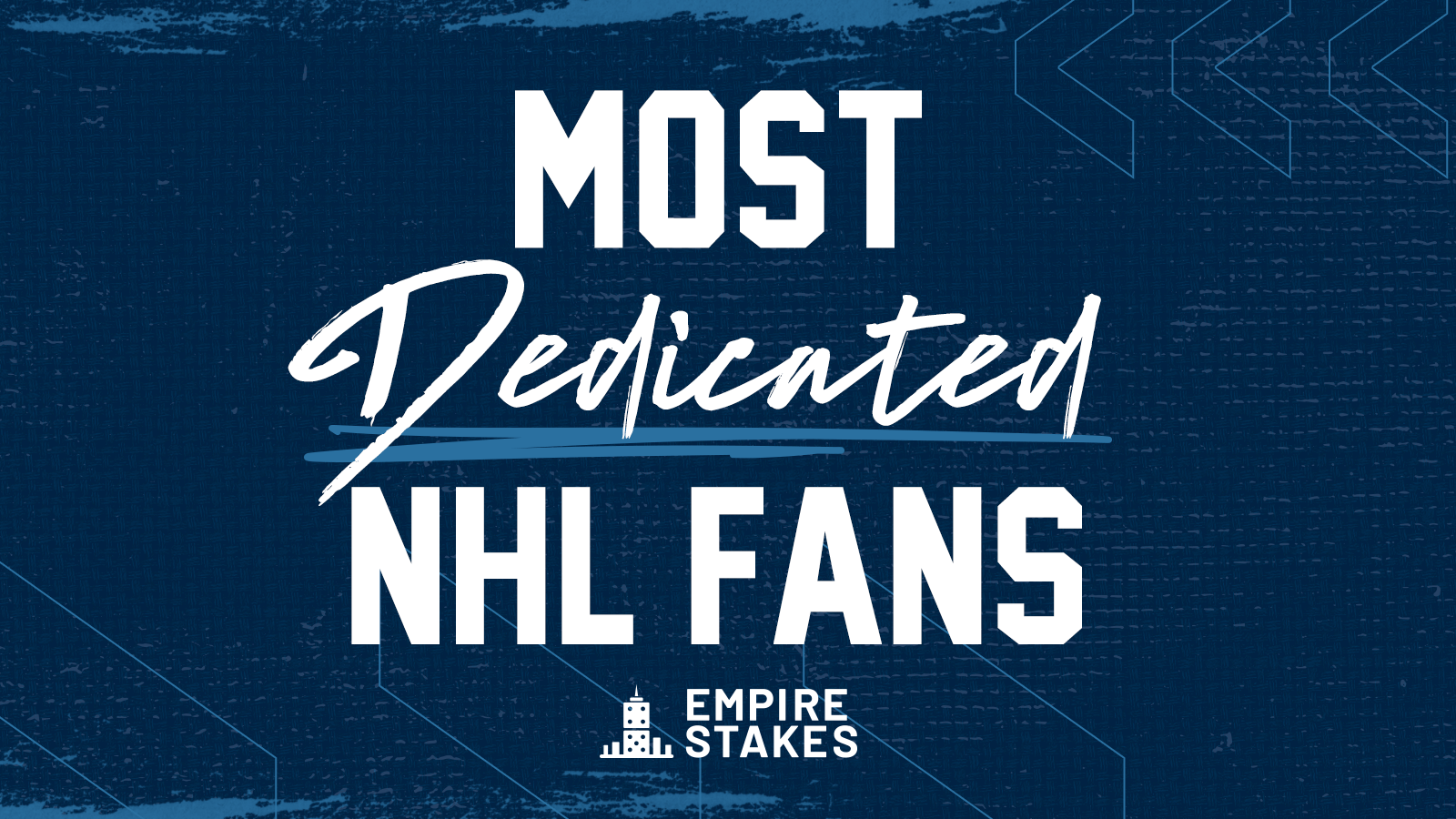 Three teams from the Empire State take to the ice this week as the Buffalo Sabres look to break a long drought, the New York Islanders look to rebound and the New York Rangers look to sustain as they open their 2022-23 regular season campaigns.

That is a lot to consider in NY sports betting.

EmpireStakes.com developed a matrix system to rank 31 of the 32 NHL teams based on the dedication of their fans. (The Seattle Kraken was not considered, due to just one year of existence.)

How We Determined Rankings

Here is the methodology we used.

The first category - Game Day Commitment - was a weighted grouping of “capacity % by wins” since the 2010 season (2019 & 2020 eliminated due to COVID) and the amount of ticket searches in the state of that team. We utilized NHL.com for attendance numbers and Google Trends to find the amount of ticket searches. Once determined, the team with the best Game Day Commitment was given 31 points, down to the worst with one point.

The second category - Fan Engagement - was a weighted grouping of social following growth over the past five years and the engagement rates of all of the NHL’s team social media accounts. We utilized SocialBlade.com to find the statistics for the category, which utilized the Facebook, Twitter, Instagram, Tiktok & YouTube of each team. Similar to the previous category, the best Fan Engagement was given 31 points down to one point. 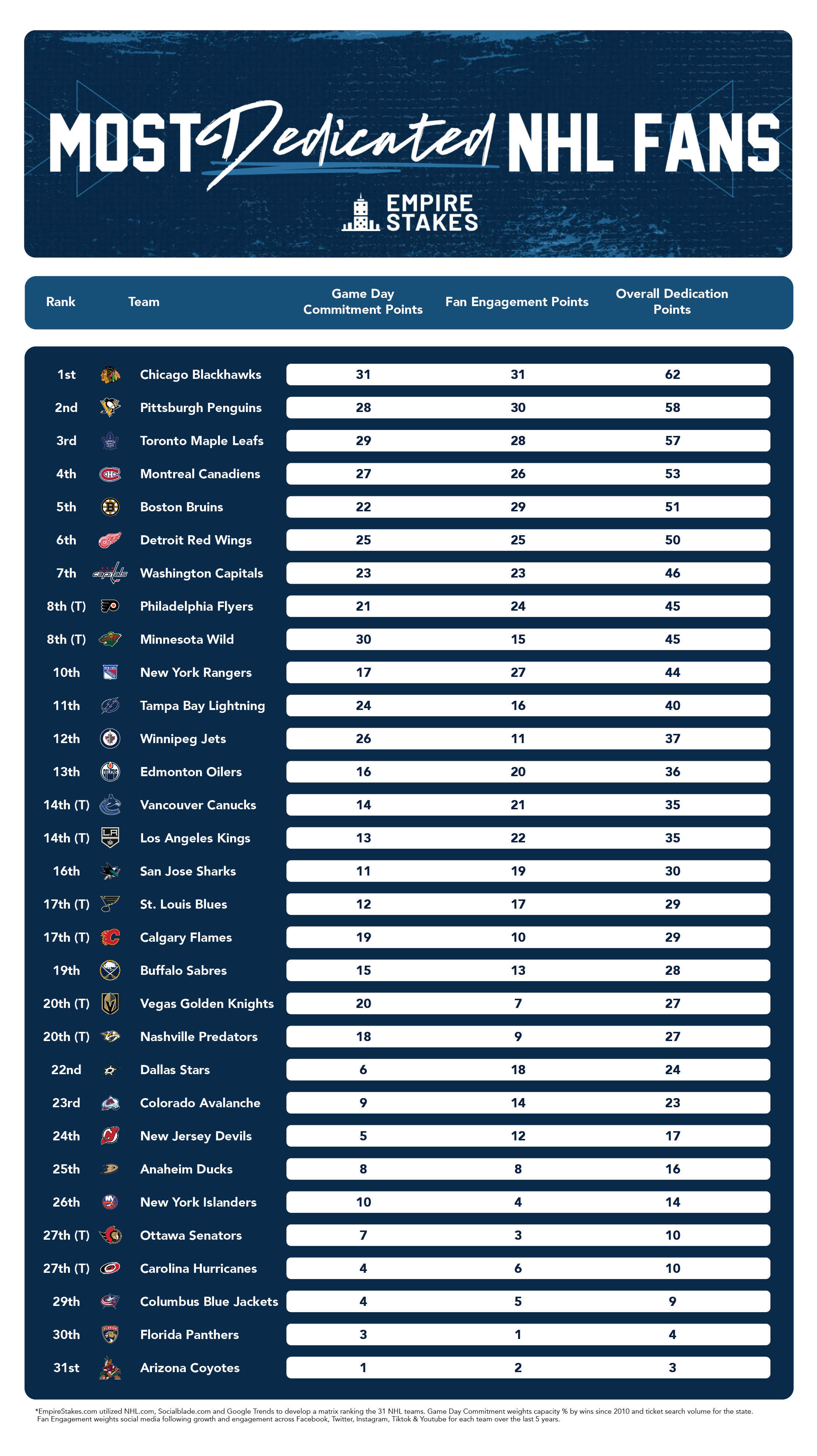 Having missed the playoffs for 11 consecutive seasons, the Buffalo Sabres (32-39-11) look to their youth movement to not only improve, but to enhance their progress in the tough Atlantic Division and hopefully earn a playoff berth.

Buffalo comes in 19th on the EmpireStakes.com rankings.

Caesars Sportsbook New York has the following future odds on the Sabres:

With the 10th--most dedicated fanbase in the league, the New York Rangers look to move one step closer to their first Stanley Cup title since 1993-94. The Rangers’ season opens up Tuesday at Madison Square Garden against its rival, the Tampa Bay Lightning, at 7 p.m.

The Rangers (52-24-6) lost to the Lightning in last year’s Eastern Conference Finals after holding a 2-0 best-of-seven series lead.

NY sports betting apps should be seeing a lot of action on the Rangers again this season.

Here is how Caesars sees the Rangers in New York NHL betting:

Ranked 26th of 31 teams for the league’s most dedicated fans, the Islanders (37-35-10) look to regroup and return to the playoffs after a tremendous run to the Eastern Conference Finals two seasons ago.

Last season, the Islanders debuted their brand-new home - UBS Arena – but had to start the year on a rather long road trip to finish construction. The result: 1-2-1 in the first week and 5-10-5 in the first 20 games of the season. A more realistic start to the season should be beneficial to the Isles.

Here’s how Caesars places the Islanders:

Count on EmpireStakes.com for good information on all the state’s professional teams as well as for the best NY betting promos.

Lou Monaco had been East Coast Scene columnist for Gaming Today in Las Vegas since June 2019, covering the East Coast sportsbook scene with emphasis on NJ and PA. He also currently is a part-time writer for the high school sports department for NJ Advanced Media (NJ.com) in Iselin, NJ. Lou has over 30 years sports experience with previous stints at ESPN SportsTicker, Daily Racing Form and Oddschecker.